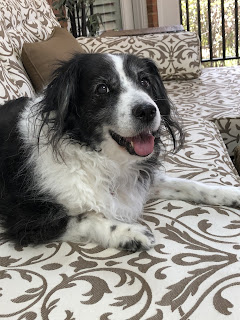 Sarah:We said goodbye to our sweet Miss Emmy this morning. In February we celebrated her 9th Got Day anniversary from MABCR. Of all the dogs I’ve ever had, she was by far the sweetest soul. She was the only dog my husband had ever invited up to lay in bed with us. She loved getting belly rubs and just hanging out with us, wherever in the house we were. While initially nervous in the car, she settled and frequently rode back and forth from northern Virginia to North Carolina with me when we visited my daughter. She didn’t have the characteristic Border Collie drive — if anything, she was the consummate couch potato! When we initially brought her home, she was 5 years old and we had to teach her how to play with toys. She glommed onto her squeaky hedgehog but could care less about the balls, the rope tugs, or other stuffies. She preferred not to be around other dogs, but every morning she would go out to the back fence, sit and wait for our neighbor’s little Lily (a Maltese-Bishon mix) to come out. And if she didn’t, she would bark for her. Funniest thing!  If Lily did come out, Emmy would turn tail and run the other way and ignore her!Miss Emmy would greet each day, bouncing out of her bed, give me a hug between my knees as I rubbed her ears, then bound down the stairs to make sure the Resident Elf (my hubby) didn’t forget to leave food in her bowl. She always ate like she had been starved to death and it would be her last meal! As she got older, she wasn’t keen on going on our walks any longer. But she would do her twice-daily walkabout in the yard sniffing absolutely every scent there was to be captured by her nose. Her hearing went a couple of years ago, and this past winter, her rear legs started to give out. She was kept comfortable with some helpful drugs, but last week she had come to the point she couldn’t hold herself up to do her potty business.So it was with a heavy heart we said goodbye. I will miss her hugs, her sweet spirit, her excitement to get each day started, and her wonderful companionship. See you in heaven, my dear Emmy.Going forward, if you come across another dog you think would fit into our family, please let me know. The house is so empty right now.Cordially,Kathleen
Posted by Sarah at 10:52 AM No comments: 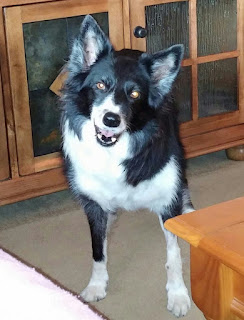 Here we meet again, with heavy hearts. We are sad to write we lost our baby girl Nell on Monday, 9/11. She had a massive stroke on Saturday and went into total paralysis. Nothing could be done except to let her go to be with her Big Sis. I spent all day Sunday until it was time to go to bed just lying with Nellie loving her and keeping her hydrated, knowing full well what the inevitable outcome would be come Monday morning. We laid her to rest at approximately 9:30 am.

She was a beautiful and loving girl and we will miss her terribly. After the pain of losing Scooch had passed, Nellie blossomed (no more need to be jealous!), and ate up all the love we gave her. We know Scooch wanted her Baby Sister back and now they are together.

WOW, I just took the time to read my email I sent to you last year (below) regarding Scoochy and noted ironically how the dates coincided. Scooch and Nell were truly connected. (editor's note - Scooch passed 11 September 2016)

As you can imagine, we are completely devastated. The house is too quiet, no one to say goodbye to in the mornings and no one to greet us at the end of the day. My prayer is that the girls will be in heaven waiting for us when it’s our time to join them. God bless you, Baby Mamu! Play in peace!!

** For those of you who know me, Nell is my Grace's littermate, so passings such as this, remind us all how precious the old age of our dear friends is. ~ Sarah
Posted by Sarah at 10:34 AM No comments: 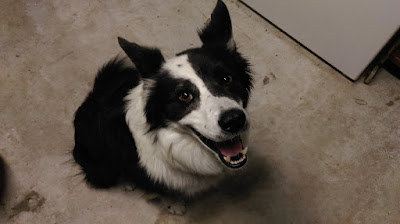 Jackie
Posted by Sarah at 8:56 AM No comments: 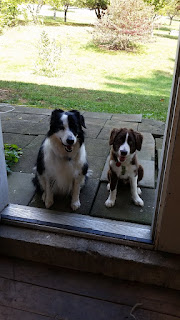 I wanted to give you an update on Junior (Newt).  He is the absolute love of our lives, along with his brother Bo of course. We can not imagine life without him anymore and he spends all day, everyday with us. My older dog Bo NEVER played with any of my foster dogs, and as I type this, he and Junior are wrestling at my feet. They love to race around the yard and play frisbee. They love each other. Everyone compliments me on how well trained Junior is already, he is so smart! He knows sit, stay, lay down, come, paw left and right, spin, and we are working on roll over and fetch. He rarely has accidents in the house, and only chews on his toys. 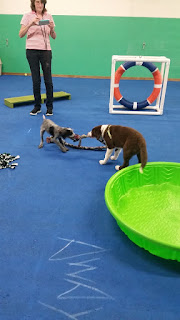 He went to his first puppy class today which he absolutely loved. He loved playing with all the other dogs, meeting new people, and playing on big toys. He loves rides in the car and coming to work with me. His vet appointments have been going well. He has been microchipped, had all puppy shots, rabies shot and is being vaccinated for Lyme because of where we live. He is on Nex guard and Heartguard already.

I can not express how fortunate I am for being abe to adopt this little man. He is exactly what I have wanted to add to my family for the last couple of years, I am so glad I waited. Thank you so much for letting him adopt us, he is very very happy. 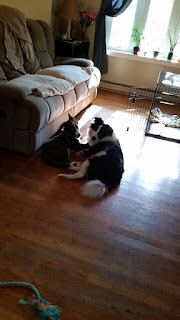 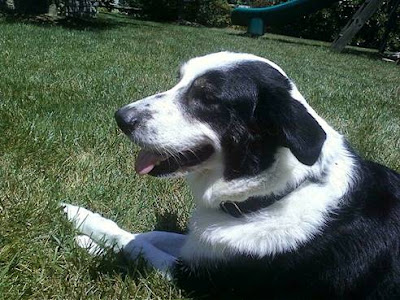 Back in late summer of 2008 we adopted a beautiful dog named Sawyer.  He came to MABCR from West Virginia.  Sawyer was a mix of Border Collie and a Sheep Guardian Dog – Probably Bernese Mountain.    I send you this email as Sawyer passed away today.   He was diagnosed with a terminal Nasal Carcinoma in May.

I wanted to let you know since we were under obligation to return him to you if we didn’t wish to care for him.  This of course was never the case.  He was deeply loved and a wonderful member of our family.   Thank you for picking us for him.

Mary
Urbana, Maryland
Posted by Sarah at 8:50 PM No comments:

Email ThisBlogThis!Share to TwitterShare to FacebookShare to Pinterest
Labels: In memory 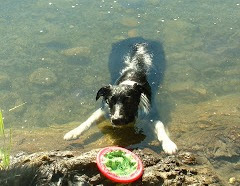 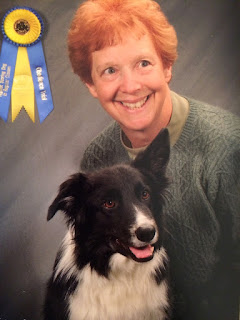 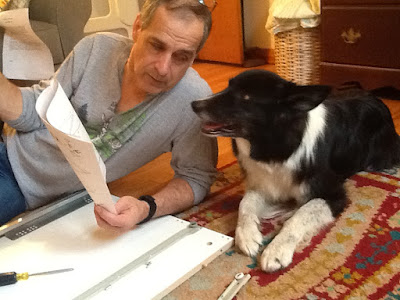 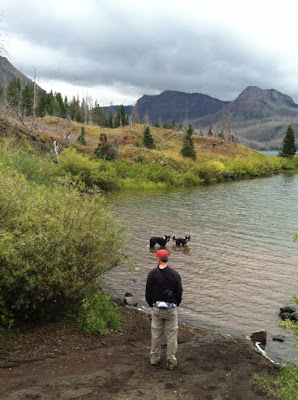 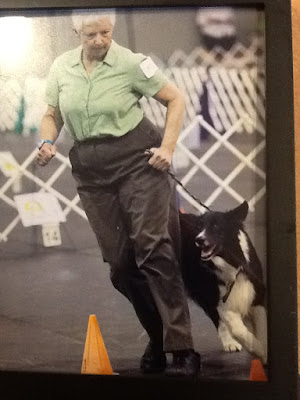 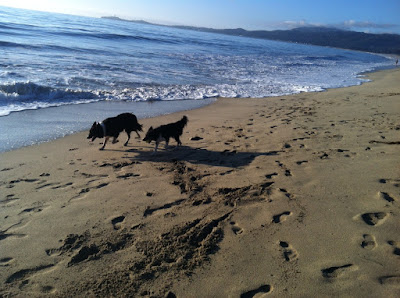 On Our Way! Travels With Polly 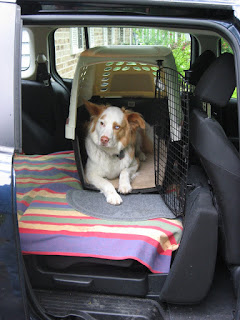 We are well on our way to CA. Polly says hello! Here are a few photos and a couple of videos which I hope you'll be able to view. Polly insisted on being the first item of luggage loaded into the car--there she is in her crate all ready to go (we had to convince her that we weren't leaving for another couple of hours). We spent last night at a KOA campground--that's us on the porch swing. And then today we found an amazing dog-friendly spot, Elk Meadow Open Space Park. Lots of dog-friendly hiking trails, a lovely cool stream to splash in, and a large fenced-in area with rocks and trees and things to scramble over. 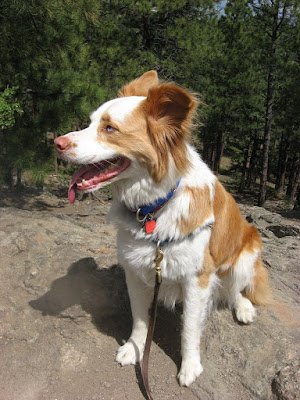 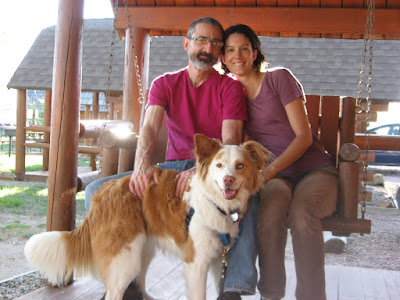 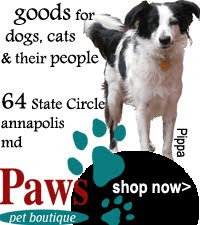